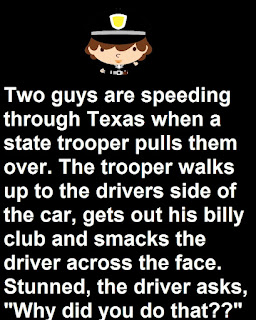 Two guys are speeding through Texas when a state trooper pulls them over. The trooper walks up to the drivers side of the car, gets out his billy club and smacks the driver across the face. Stunned, the driver asks, "Why did you do that??"
The trooper responds, "You're in Texas now son, you have that license out and ready around here!"
"I apologize sir, I'm not from around here."
The trooper then walks to the passenger side of the car, and taps on the window. The passenger rolls down his window and the trooper takes out his club and smacks the passenger across the face.
"What was that for?" asked the passenger.
"I know your kind," says the trooper, "About two miles down the road you would have looked at your buddy and said 'I wish that son of a bitch would have tried that crap with me!"'
Newer Post Older Post