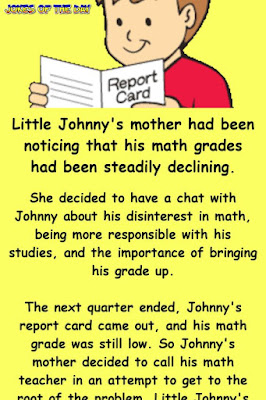 Little Johnny’s mother had been noticing that his math grades had been steadily declining.

She decided to have a chat with Johnny about his disinterest in math, being more responsible with his studies, and the importance of bringing his grade up.

But to her dismay, his grade had still not improved on his next report card.

In an act of desperation, little Johnny’s mother decided to transfer him to the local Catholic school.