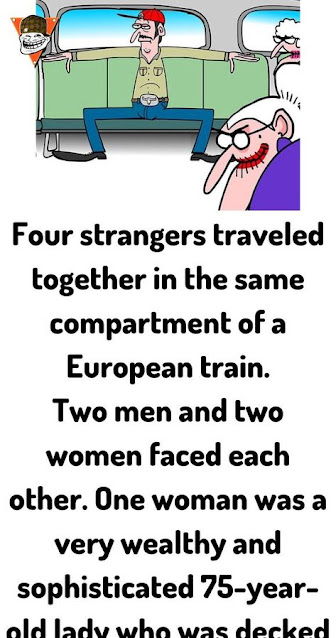 Four strangers traveled together in the same compartment of a European train.

Two men and two women faced each other.

One woman was a very wealthy and sophisticated 75-year-old lady who was decked out in the finest of furs and jewelry.

Next to her sat a beautiful young woman, nineteen years old, who looked like something right off the cover of a fashion magazine.

Across from the older lady was a man in his late-forties who was a highly decorated Sergeant Major in the Army.

And next to the Sergeant Major sat a young private fresh out of boot camp.

As these four strangers traveled, they talked and chatted about trivial things until they entered an unlighted tunnel, and there they sat in complete darkness and total silence, until the sound of a distinct kiss broke the silence; following the kiss a loud slap could be heard throughout the cabin.

In the ensuing period of silence the four strangers sat quietly with their own thoughts.

The older lady was thinking, “Isn’t it wonderful that even in this permissive day and age there are still young women who have a little self-respect and dignity?”

The young woman, shaking her head and greatly puzzled, asked herself ...