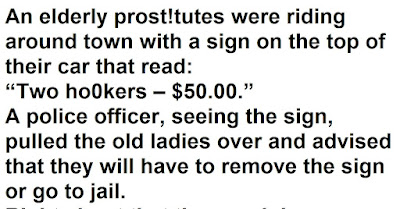 An elderly prost!tutes were riding around town with a sign on the top of their car that read:

A police officer, seeing the sign, pulled the old ladies over and advised that they will have to remove the sign or go to jail.

Right about that time a minivan passed by with a sign on the side of it that read:

“How come you don’t stop them?” asked one of the old ladies.

The two old ladies of the night pouted a bit, but they took their sign down and drove off peacefully.

The following day the same police officer was running radar when he noticed the same two old ladies driving around with another sign on their car.

Sighing, he flipped his lights on and began to catch up when he noticed what the new sign read: A sixteen year-old boy came home with a brand new Ford F150. His parents look at the truck and ask, “Where did you get that truck?!”
“I bought it today,” he says.
“With what money?” says his mother.
They knew what a new F150 cost.
“Well,” he says, “this one cost me just fifteen dollars.”
The father looks at him like he’s crazy.
“Who would sell a truck like that for fifteen dollars?” he says.
“It was the lady up the street,” says the boy. “I don’t know her name – they just moved in. She saw me ride past on my bike and asked me if I wanted to buy her F150 for fifteen dollars.
“Oh my Goodness!” says the mother. “Maybe she’s mentally ill or has Alzheimer’s something. John, you better go see what’s going on.”
So the boy’s father walks up the street to the house where the lady lives and finds her out in the yard calmly planting petunias.
He introduces himself as the father of the boy to whom she had sold a new Ford F150 truck for fifteen dollars and asks to know why she did it.
“Well,” she says, “two days ago my husband left on a business trip. Yesterday I got a phone call from his boss and found out that he really ran off to Hawaii with his secretary and doesn’t intend to come back.”
“Oh, my goodness, I’m so sorry,” the father says. “But what does that have to do with my son and your truck?”
“Well, this morning he called and told me he was stranded because he got robbed of his wallet with all his credit cards and cash. He told me to sell his new F150 and send him the money. So I did.”
Newer Post Older Post