Home » »Unlabelled » The Preacher Talked About The Old Man – Joke

The Preacher Talked About The Old Man – Joke 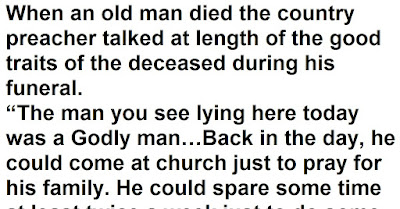 When an old man died the country preacher talked at length of the good traits of the deceased during his funeral.

“The man you see lying here today was a Godly man…Back in the day, he could come at church just to pray for his family. He could spare some time at least twice a week just to do some chores here at the church. “

“He has helped this church grow in so many ways that words alone aren’t enough to quantify his remarkable work. Most of us today lack the passion and love that he had for the church.”

The congregation was just silent listening with keen interest as the preacher continued,

“among the wolves, he was the sheep. And above all that, he was a wonderful friend and a blessing among his friends and relatives. He was a faithful and good husband to our wonderful sister over there. Our brother was a man of honour. He treasured his wife and kids. He could trade them for nothing in this world. He was kind, faithful and a loving husband..”

The pastor, knowing that he had touched the widow’s soul he continued to preach with his voice rising with every word,

“in fact, he was among the marriage counsellors’ committee in this church. He has helped save many marriages which were on the verge of being broken. He had sowed love where there was hatred..”

By this time, the widow had stood up walking towards the casket of her late husband when some of her relatives gripped her, “sit back down, the pastor is still preaching…” they said.

“No, I need to check if my husband is the one inside that casket,” she said.

“What?” Everyone was surprised.

The lady composed herself and gave the pastor a blank stare,

“Excuse me pastor, but are you at the right funeral?”

“Excuse me?” wondered the pastor shocked.

“Listening to your preaching about my husband for the past thirty minutes, I sure believe you have no idea who he was. My husband never went to church, if he did, he’d steal that day’s collection and spend it on women. I see you’re still in the dark that he was the reason why your wife attempted numerous times to leave you. By the way, everyone knows that Esther and John aren’t your children. Ask your wife, she’s had three abortions for him…”

That’s how the pastor fainted…