Home » »Unlabelled » Friday Joke: A Solicitor parks his brand new Porsche in front of the office

Friday Joke: A Solicitor parks his brand new Porsche in front of the office 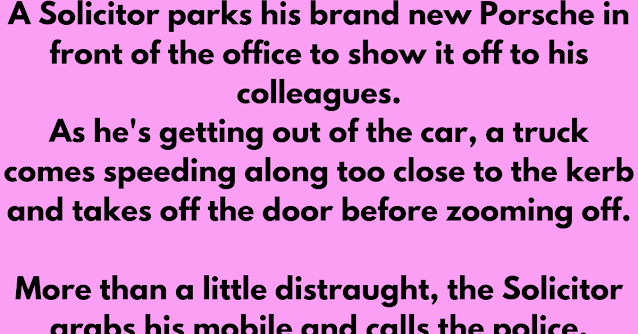 A Solicitor parks his brand new Porsche in front of the office to show it off to his colleagues.

As he's getting out of the car, a truck comes speeding along too close to the kerb and takes off the door before zooming off.

More than a little distraught, the Solicitor grabs his mobile and calls the police.

Five minutes later, the police arrive. Before the policeman has a chance to ask any questions, the man starts screaming hysterically: 'My Porsche, my beautiful silver Porsche is ruined. No matter how long it's at the panel beaters it'll simply never be the same again!'

After the man finally finishes his rant, the policeman shakes his head in disgust.

'I can't believe how materialistic you bloody Solicitors are,' he says. 'You lot are so focused on your possessions that you don't notice anything else in your life.'

'How can you say such a thing at a time like this?' sobs the Porsche owner.

The policeman replies, 'Didn't you realise that your arm was torn off when the truck hit you.'

A man observed a woman in the grocery store with a toddler-aged girl in her shopping trolley. As they passed the biscuit section, the little girl asked for biscuits and her mother told her no.

The little girl immediately began to whine and fuss, and the mother said quietly: “Now Monica, we just have half of the aisles left to go through – don’t be upset. It won’t be long.”

Soon, they came to the sweets aisle and the little girl began to shout for chocolate. When told she couldn’t have any, she began to cry.

The mother said softly: “There, there, Monica, don’t cry – only two more aisles to go and then we’ll be checking out.”

When they got to the checkout stand, the little girl immediately began to clamour for lollipops and burst into a terrible tantrum upon discovering there’d be none purchased. The mother patiently said: “Monica, we’ll be through this checkout stand in five minutes and then you can go home and have a nice nap.”

The man was very impressed with the woman’s handling of the situations and followed them out to the car park and stopped her to compliment her, “I couldn’t help noticing how patient you were with little Monica,” he began.

The mother sighed and replied: “Oh, no. My little girl’s name is Tammy… I’m Monica.” share with friends and family..