Home » »Unlabelled » The Rescue Squad Was Called To The Home.

The Rescue Squad Was Called To The Home. 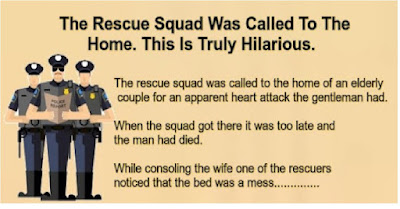 The rescue squad was called to the home of an elderly couple for an apparent heart attack the gentleman had.

When the squad got there it was too late and the man had died.

While consoling the wife one of the rescuers noticed that the bed was a mess.

He asked the lady what symptoms the man had suffered and if anything had precipitated the heart attack.

“Well, we were in the bed making love and he started moaning, groaning, thrashing about the bed, panting, and sweating. I thought he was coming, but I guess he was going.”