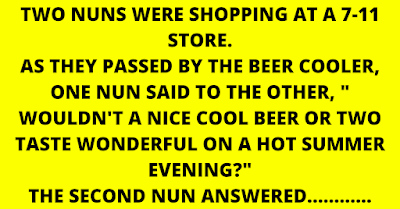 AS THEY PASSED BY THE BEER COOLER, ONE NUN SAID TO THE OTHER, " WOULDN'T A NICE COOL BEER OR TWO TASTE WONDERFUL ON A HOT SUMMER EVENING?"

THE SECOND NUN ANSWERED, "INDEED IT WOULD, SISTER, BUT I WOULD NOT FEEL COMFORTABLE BUYING BEER, SINCE I AM CERTAIN IT WOULD CAUSE A SCENE AT THE CHECKOUT STAND."

"I CAN HANDLE THAT WITHOUT A PROBLEM" THE OTHER NUN REPLIED, AND SHE PICKED UP A SIX-PACK AND HEADED FOR THE CHECK-OUT.

THE CASHIER HAD A SURPRISED LOOK ON HIS FACE WHEN THE TWO NUNS ARRIVED WITH A SIX-PACK OF BEER. "WE USE BEER FOR WASHING OUR HAIR" THE NUN SAID, "BACK AT OUR NUNNERY, WE CALL IT CATHOLIC SHAMPOO".

WITHOUT BLINKING AN EYE, THE CASHIER REACHED UNDER THE COUNTER. PULLED OUT A PACKAGE OF PRETZEL STICKS, AND PLACED THEM IN THE BAG WITH THE BEER.

HE THEN LOOKED THE NUN STRAIGHT IN THE EYE, SMILED, AND SAID:

"THE CURLERS ARE ON THE HOUSE." 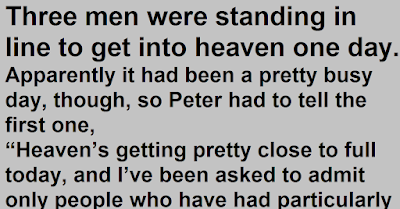 Three men were standing in line to get into heaven one day. Apparently it had been a pretty busy day, though, so Peter had to tell the first one,
“Heaven’s getting pretty close to full today, and I’ve been asked to admit only people who have had particularly horrible deaths. So what’s your story?”
So the first man replies:
“Well, for a while I’ve suspected my wife has been cheating on me, so today I came home early to try to catch her red-handed. As I came into my 25th floor apartment, I could tell something was wrong, but all my searching around didn’t reveal where this other guy could have been hiding. Finally, I went out to the balcony, and sure enough, there was this man hanging off the railing, 25 floors above ground! By now I was really mad, so I started beating on him and kicking him, but wouldn’t you know it, he wouldn’t fall off. So finally I went back into my apartment and got a hammer and starting hammering on his fingers. Of course, he couldn’t stand that for long, so he let go and fell, but even after 25 stories, he fell into the bushes, stunned but okay. I couldn’t stand it anymore, so I ran into the kitchen, grabbed the fridge and threw it over the edge where it landed on him, killing him instantly. But all the stress and anger got to me, and I had a heart attack and died there on the balcony.”
“That sounds like a pretty bad day to me,” said Peter, and let the man in.
The second man comes up and Peter explains to him about heaven being full, and again asks for his story.
“It’s been a very strange day. You see, I live on the 26th floor of my apartment building, and every morning I do my exercises out on my balcony. Well, this morning I must have slipped or something, because I fell over the edge. But I got lucky, and caught the railing of the balcony on the floor below me. I knew I couldn’t hang on for very long, when suddenly this man burst out onto the balcony. I thought for sure I was saved, when he started beating on me and kicking me. I held on the best I could until he ran into the apartment and grabbed a hammer and started pounding on my hands. Finally I just let go, but again I got lucky and fell into the bushes below, stunned but all right. Just when I was thinking I was going to be okay, this refrigerator comes falling out of the sky and crushes me instantly, and now I’m here.”
Once again, Peter had to concede that that sounded like a pretty horrible death.
The third man came to the front of the line, and again Peter explained that heaven was full and asked for his story.
“Picture this,” says the third man, “I’m hiding inside a refrigerator…”
Newer Post Older Post