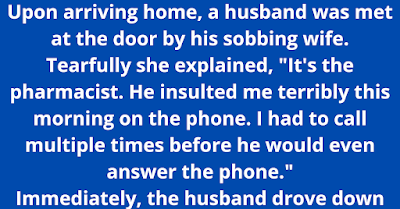 Upon arriving home, a husband was met at the door by his sobbing wife.

Tearfully she explained, "It's the pharmacist. He insulted me terribly this morning on the phone. I had to call multiple times before he ...would even answer the phone."

Immediately, the husband drove down town to confront the chemist, and demand an apology.

Before he could say more than a word or two, the chemist told him, "Now, just a minute, listen to my side of it. This morning the alarm failed to go off, so I was late getting up. I went without breakfast and hurried out to the car, just to realise that I'd locked the house with both house and car keys inside and had to break a window to get my keys. "Then, driving a little too fast, I got a speeding ticket. Later, when I was about three blocks from the store, I had a flat tyre. "

"When I finally got to the store a bunch of people were waiting for me to open up. I got the store opened and started waiting on these people, all the time the darn phone was ringing."

He continued, "Then I had to break a roll of 10p coins against the cash register drawer to make change, and they

spilled all over the floor. I had to get down on my hands and knees to pick up the coins and the phone was still ringing.

When I came up I cracked my head on the open cash drawer, which made me stagger back against a showcase with a bunch of perfume bottles on it. Half of them hit the floor and broke."

"Meanwhile, the phone is still ringing with no let up, and I finally got back to answer it. It was your wife. She wanted to know how to use a rectal thermometer."

"And believe me Mr, as God is my witness, all I did was tell her."

The Pastor entered his donkey in a race and

The Pastor was so pleased with the donkey

that he entered it in the race again and it won again.

The Bishop was so upset with this kind of

publicity that he ordered the Pastor not to enter       the donkey in another race.

The next day the local paper headline read:

This was too much for the Bishop so he

ordered the Pastor to get

rid of the donkey.

The Pastor decided to give it to a Nun in a

The local paper, hearing of the news, posted

the following headline the next day:

NUN HAS BEST ASS IN TOWN.

He informed the Nun that she would have to get rid of the donkey so she sold it to a farm   for $10.

The next day the paper read:

This was too much for the Bishop so he

ordered the Nun to buy back

the donkey and lead it to the plains where

it could run wild.

The next day the headlines read:

NUN ANNOUNCES HER ASS IS WILD AND FREE.

The Bishop was buried the next day.

The moral of the story is . . . being concerned about public opinion can bring you much grief and misery . . . even shorten your life.

So be yourself and enjoy life.

Stop worrying about everyone else's ass

and just cover your own !!!

You'll be a lot happier and live longer!