Home » »Unlabelled » My Wife And I Do That Every Night – Joke

My Wife And I Do That Every Night – Joke 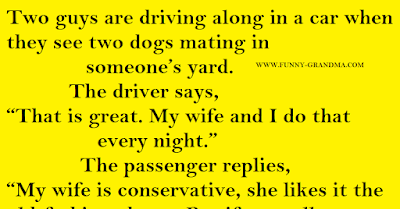 Two guys are driving along in a car when they see two dogs mating in someone’s yard.

“That is great. My wife and I do that every night.”

“My wife is conservative, she likes it the old-fashioned way. But if you tell me how you get your wife to do this, I would like to try it.”

“Give your wife two drinks and she will be all set.”

The next morning they’re cruising along and the driver asks,

“It was great, but it took my wife ten drinks.”

The driver looks at him funny and says,

“Yes. After two she was more than willing to make love that way, but it took her eight more to get her out on the front lawn!”