Home » »Unlabelled » A woman has having a problem with her bedroom closet door .

A woman has having a problem with her bedroom closet door . 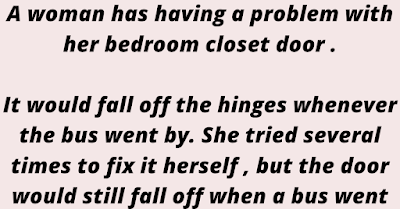 A woman has having a problem with her bedroom closet door .

It would fall off the hinges whenever the bus went by. She tried several times to fix it herself , but the door would still fall off when a bus went by .

She finally called a repair man . He showed up , looked over the door and found no problem.

Then the bus came , and sure enough, the door fell off .

He said that he was going to step inside and for her to close the door behind him.

As soon as the door was closed her husband came home and heard her talking to someone in their bedroom.

He burst in demanding to know who was in there .

Before she could answer he looked in the closet and found the repairman and asked 'what' s he doing in there ?'

The repairman said : 'you're not going to believe this , but I'm waiting for the bus....