Home » »Unlabelled » Don’t take that drink, that is the devil’s brew

Don’t take that drink, that is the devil’s brew 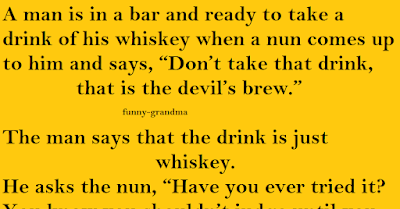 A man is in a bar and ready to take a drink of his whiskey when a nun comes up to him and says, “Don’t take that drink, that is the devil’s brew.”

The man says that the drink is just whiskey.

He asks the nun, “Have you ever tried it? You know you shouldn’t judge until you at least try it once.”

The nun says, ‘Mother Superior told me to never drink the Devil’s brew, and being a good and faithful servant, I always do as she says.”

The man says, “You have to at least try one drink. The taste is so smooth. You can’t judge it without tasting it. C’mon I will buy you a drink.”

The nun says, “Fine, but tell the bartender to put it into a cup and grab me a straw – I don’t want to be seen drinking that evil brew.”

The man agrees and goes to the bar to order the drinks.

The man says, “Bartender, I want two shots of whiskey, but put one in a plastic cup and give me a straw.”

The bartender shakes his head and says,

“Is that drunken nun back in here again?!”