Home » »Unlabelled » joke of the day: A farmer was called to serve on jury duty

joke of the day: A farmer was called to serve on jury duty 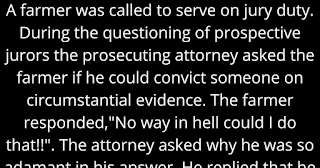 A farmer was called to serve on jury duty. During the questioning of prospective jurors the prosecuting attorney asked the farmer if he could convict someone on circumstantial evidence. The farmer responded,

"Well sir", the farmer began, "I was out in the barn milking ole' Bessie one hot day and as I was milking her she kicked over the milk pail with her right front foot.

The milk soaked my overalls and underwear, so I took them off, rinsed them out in the water trough and hung them out to dry. Then, I got a piece of rope and tied her right foot to the floor.

I sat back down and starting milking again and the silly cow kicked over the pail with her left front foot. So I tied that one down to the floor as well.

She then proceeded to kick over the pail with each of her back feet so I tied both of them to the floor...

Well, I thought I things under control until she whipped her tail around and slapped me right in the face.

Very annoyed at her antics, I moved my stool behind her, stood up on it, and as I was in the process of tying her tail to one of the rafters, wearing nothing but my T-Shirt and boots, my wife walked into the barn!! .....No Sir!! I do not believe in Circumstantial Evidence."