Home » »Unlabelled » A lawyer dies and goes to hell...

A lawyer dies and goes to hell... 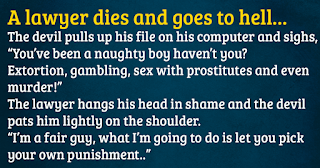 The devil pulls up his file on his computer and sighs “You’ve been a naughty boy haven’t you? Extortion, gambling, sex with prostitutes and even murder!”.

The lawyer hangs his head in shame and the devil pats him lightly on the shoulder.

“I’m a fair guy, what I’m going to do is let you pick your own punishment..”

The devil leads him through the fields of tortured souls into his manor and down a long darkened hallway. Before them was three large oak doors.

“Now!” Said the devil “You get to look at each torture behind the doors and decide which one you want to do, but be warned... whatever you pick you will have to endure for the next 100 years!”

The lawyer nods solemnly and walks towards the 1st door, pushing it open he sees a man being whipped by a horrendous demon over and over again.

Shuddering he slams the door shut and walks to the second, Behind that one is a man being hung over and over again, with each snap of the neck or strangulation he is restored and forced to endure the act again and again.

The lawyer retches and walks to the third door. Swinging it open he sees a gorgeous blonde, big breasted, slim and stunning kissing a disheveled and dirty man deeply, it is passionate and intense, hands are everywhere and just watching causes the lawyer to grin lewdly.

Rubbing his hands together he turns to the devil and says “I want door number three!”

Walking to the door the devil swings it open and leans in shouting: “Alright blondie! Times up!”.