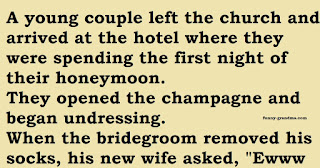 A young couple left the church and arrived at the hotel where they were spending the first night of their honeymoon.

They opened the champagne and began undressing.

When the bridegroom removed his socks, his new wife asked, "Ewww what's wrong with your feet? Your toes look all mangled and weird.

"Why are your feet so gross?"

"I had Tolio as a child," he answered.

"You mean Polio?" she asked.

No, Tolio. The disease only affected my toes."

The bride was satisfied with this explanation, and they continued undressing.

When the groom took off his pants, his bride once again wrinkled up her nose.

"What's wrong with your knees?" she asked. "They're all lumpy and deformed!"

"As a child, I also had Kneasles," he explained.

"You mean Measles?" she asked.

"No, Kneasles. It was a strange illness that only affected my knees."

The new bride had to be satisfied with this answer.

As the undressing continued, her husband at last removed his underwear.