The man who died four times 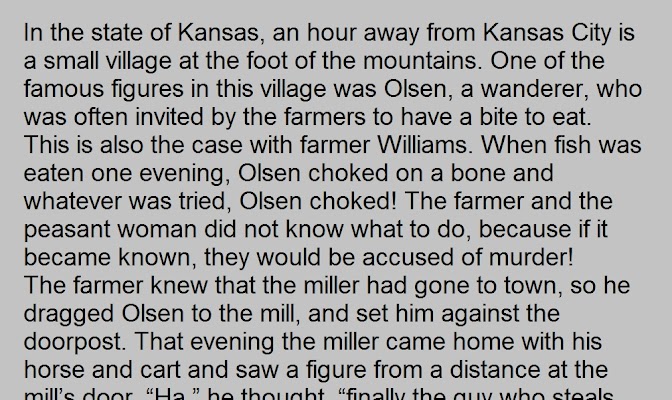 In the state of Kansas, an hour away from Kansas City is a small village at the foot of the mountains. One of the famous figures in this village was Olsen, a wanderer, who was often invited by the farmers to have a bite to eat. This is also the case with farmer Williams. When fish was eaten one evening, Olsen choked on a bone and whatever was tried, Olsen choked! The farmer and the peasant woman did not know what to do, because if it became known, they would be accused of murder!

The farmer knew that the miller had gone to town, so he dragged Olsen to the mill, and set him against the doorpost. That evening the miller came home with his horse and cart and saw a figure from a distance at the mill’s door. “Ha,” he thought, “finally the guy who steals grain from me.” And he crept around the mill, grabbed a piece of wood, jumped out, and gave the guy a huge blow. Only then did he realize that it was Olsen and that the blow had been such a hit that Olsen was dead. He didn’t know what to do! Finally he dragged Olsen down to the river where he bumped him against a large boulder.

Early the next morning, the servant John had to get bread from his boss in town. He carried a large wicker basket on his back along the river when he saw Olsen sitting down there. “Hey, Olsen!” he cried, but Olsen did not answer. “Of course it is peeling,” he thought, and he took a stone and wanted to throw it into the water just before Olsen. But, oh fright! The stone hit Olsen! This fell over into the water! The servant rushed down to pull Olsen out of the water, but to his horror, Olsen was already drowned! He, too, did not know what to do and dragged him halfway up the river and the road into the bushes and hid him there.

He was barely on the road again when he saw a few men approaching in the distance! He quickly returned from where he had come and started his journey again. The two men returned from the city. They had a huge basket with breads that they had stolen from the bakery in town. When they saw the servant in the distance, they quickly hid the large basket of breads in a grove between the road and the river and continued to walk happily and laughed and planned to fetch the loaves later in the day.

When they had disappeared from sight, the servant thought, “I have to see if they have discovered anything.” And … to her great surprise, he found the basket of breads. “That’s nice,” he thought, loading the loaves into his own basket and putting Olsen into the thieves basket and covering him well with the remaining loaves and pieces of cloth and going home.

Later in the afternoon the thieves returned to get the basket of breads. They said to each other: “It’s even heavier than I thought, we’ve done a good catch.” But when they finally got home, they were shocked to discover what was in the basket … a dead Olsen! What now?

They tied Olsen on a horse. The poor animal gave a great blow to his buttock and pulled hard on his tail. The horse was so shocked that it immediately ran wild. The thieves ran after it, screaming, “Hold the thief, hold the thief!” and shot in the air with a gun. The horse was even more shocked and disappeared from view.

Olsen and the horse were never found again. Only if you are in the mountains towards evening and you hear hooves in one go, the people say to each other: “There Olsen goes!”