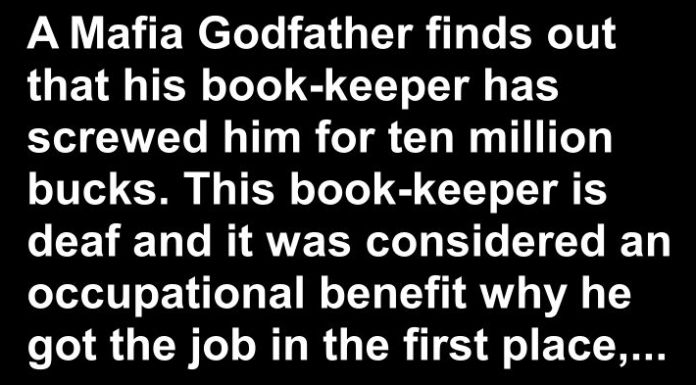 A Mafia Godfather finds out that his book-keeper has screwed him for ten million bucks. This book-
keeper is deaf and it was considered an occupational benefit why he got the job in the first place, Since
it was assumed that a deaf book-keeper would not be able to hear anything and never have to testify in
court. When the Godfather goes to shake down the book-keeper about his missing $10 million bucks,
He takes along his lawyer, who knows sign language. The Godfather asks the book-keeper: “Where is
the $10 million bucks you embezzled from me?” The lawyer, using sign language, asks the book-keeper
where the money is hidden. The book-keeper signs back: “I don’t know what you are talking about.”
The lawyer tells the Godfather: “He says he doesn’t know what you’re talking about.” That’s when the
Godfather pulls out a 9mm pistol, puts it to the book-keeper’s temple, cocks it up and says: “Ask him
again!” The attorney signs to the underling: “He’ll kill you for sure if you don’t tell him!” The book-
keeper signs back: “OK! You win! The money is in a brown briefcase, buried behind the shed in my
cousin Enzo’s backyard in Queens!” The Godfather asks the lawyer: “Well, what’d he say?” The lawyer
replies:
*
*
*
*
*
*
*
*
*
*
*
*
“He says you don’t have the guts to pull the trigger.!!”
Newer Post Older Post