Home » »Unlabelled » Your Duck is Dead

Your Duck is Dead 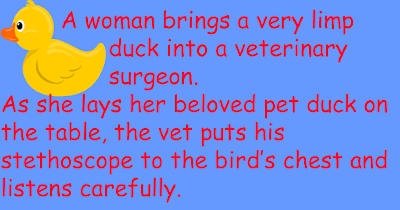 A woman brings a very limp duck into a veterinary surgeon.

As she lays her beloved pet duck on the table, the vet puts his stethoscope to the bird’s chest and listens carefully.

A moment later the vet shakes his head and says sadly, “I’m really sorry mam, but your duck, Cuddles, has passed away.“

The woman becomes quite distressed and begins to cry.

“Are you sure?” she says with tears flooding from her eyes.

“Yes mam, I am sure” the vet responds. “Your duck is definitely dead.“

“But how can you be so sure?” the woman protests. “I mean, you haven’t done any testing on him or anything have you? Perhaps he’s just stunned or in a coma or something.”

The vet rolls his eyes, then turns around and leaves the room.

A few minutes later he returns with a black Labrador retriever.

As the duck’s owner looks on in amazement, the Labrador stands on his hind legs, puts his front paws on the examination table and sniffs around the duck from top to bottom. He then looks up at the vet with sad eyes and shakes his head.

The vet pats the dog on the head and takes it out of the room.

A few minutes later the vet returns with a cat. The cat jumps on the table and delicately sniffs at the bird from its head to its feet. After a moment the cat looks up, shakes its head, meows softly and strolls out of the room.

The vet looks at the woman and says, “Look mam I’m really sorry, but as I said before, this is most definitely a duck that is no longer of this world. Your duck is dead.“

The vet then turns to his computer terminal, hits a few keys and produces a bill, which he hands to the woman.

“$150 just to tell me my duck is dead!” she shrieks with incredulity

The vet shrugs his shoulders and says, “I’m sorry mam. If you’d taken my word for it, the bill would have been $20. However with the Lab Report and the Cat Scan, it’s now $150.“