Jake and Johnny are huge baseball fans – then this happens 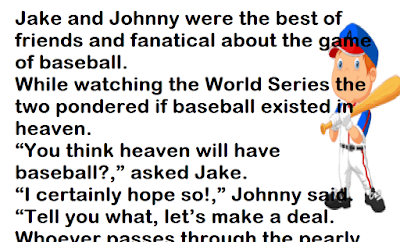 Jake and Johnny were the best of friends and fanatical about the game of baseball.
While watching the World Series the two pondered if baseball existed in heaven.
“You think heaven will have baseball?,” asked Jake.
“I certainly hope so!,” Johnny said. “Tell you what, let’s make a deal.  Whoever passes through the pearly gates first comes back and lets the other know if there’s baseball.”
“Deal,” said Jake. They shook hands and sealed the deal.
Sadly, moments later, as their team hits the game winning homerun, Jake drops dead clutching his chest. The excitement was too much.
Weeks later, Johnny was visited by the ghost of Jake. “Hey buddy!,” said Jake.
A startled Johnny shook off the sudden appearance of Jake’s apparition, and excitedly greeted his best friend, “Jake, you’re back! How’s heaven?”
“Johnny, I have good news and bad news my friend”, said Jake.
Johnny grew concerned, “Um, okay.  Gimme the good news first.  It’ll make the bad news seem less…bad.”
“Ok,” Jake replied. “The good news is there is baseball in heaven!”
Johnny cheered at knowing he will eternally be playing baseball in heaven. “That’s amazing news! Nothing you can say next will matter.”
Jake, putting a ghostly hand on Johnny’s shoulder, said, “The bad news is you’re the starting pitcher tomorrow .”
Newer Post Older Post