Home » »Unlabelled » Give Me Some Of That AIDS Stuff! – Joke

Give Me Some Of That AIDS Stuff! – Joke 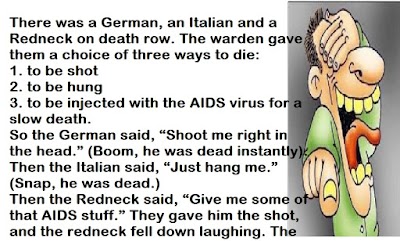 There was a German, an Italian and a Redneck on death row. The warden gave them a choice of three ways to die:
1. to be shot
2. to be hung
3. to be injected with the AIDS virus for a slow death.
So the German said, “Shoot me right in the head.” (Boom, he was dead instantly).
Then the Italian said, “Just hang me.” (Snap, he was dead.)
Then the Redneck said, “Give me some of that AIDS stuff.” They gave him the shot, and the redneck fell down laughing. The guards looked at each other and wondered what was wrong with this guy.
Then the Redneck said, “Give me another one of those shots,” so the guards did.
Now he was laughing so hard, tears rolled from his eyes and he doubled over. Finally the warden said, “What is wrong with you?”
The Redneck replied, “You guys are so stupid…..I’m wearing a condom!”
Newer Post Older Post