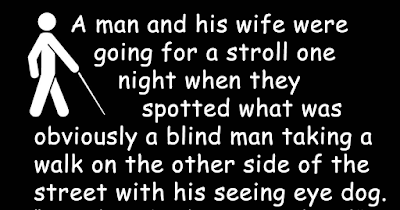 A man and his wife were going for a stroll one night when they spotted what
was obviously a blind man taking a walk on the other side of the street with his
seeing eye dog. “Wow! Isn’t that something!” remarked the wife, “look at
that man taking a stroll just like us.” They continued strolling for a few
minutes longer when they heard the man let out a loud yelp.
The dog had walked him right into a
parked car and he had clearly banged his shin pretty hard. Rushing over to help,
they were surprised to see the man reach into his pocket and pull out a treat
for the dog. “Isn’t that weird?” whispered the wife, “giving him a treat
even when he’s mad.” “Why are you giving him a treat?” questioned the
husband. “I AINT GIVING HIM A TREAT!” said the enraged man, “I’M JUST TRYING
TO FIND OUT WHERE HIS HEAD IS, SO I CAN GIVE HIM A SHARP KICK IN THE BEHIND!
Newer Post Older Post