Ray, What Did You Du! 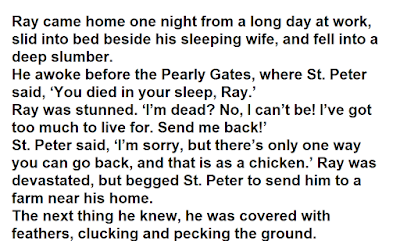 Ray came home one night from a long day at work, slid into bed beside his sleeping wife, and fell into a deep slumber.
He awoke before the Pearly Gates, where St. Peter said, ‘You died in your sleep, Ray.’
Ray was stunned. ‘I’m dead? No, I can’t be! I’ve got too much to live for. Send me back!’
St. Peter said, ‘I’m sorry, but there’s only one way you can go back, and that is as a chicken.’ Ray was devastated, but begged St. Peter to send him to a farm near his home.
The next thing he knew, he was covered with feathers, clucking and pecking the ground.
A rooster strolled past. ‘So, you’re the new hen, huh? How’s your first day here?’
‘Not bad,’ replied Ray the hen, ‘but I have this strange feeling inside. Like I’m gonna explode!’
‘You’re ovulating,’ explained the rooster. ‘Don’t tell me you’ve never laid an egg before?’
‘Never,’ said Ray.
‘Well, just relax and let it happen,’ says the rooster. ‘It’s no big deal. He did, and a few uncomfortable seconds later, out popped an egg!
He was overcome with emotion as he experienced motherhood. He soon laid another egg – his joy was overwhelming.
As he was about to lay his third egg, he felt a smack on the back of his head, and heard..
“Ray, wake up! You shit the bed!”
Newer Post Older Post