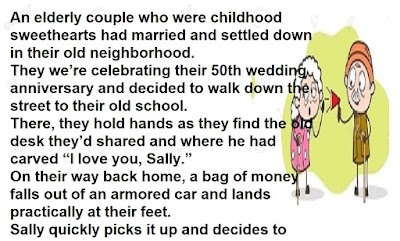 An elderly couple who were childhood sweethearts had married and settled down in their old neighborhood.
They we’re celebrating their 50th wedding anniversary and decided to walk down the street to their old school.
There, they hold hands as they find the old desk they’d shared and where he had carved “I love you, Sally.”
On their way back home, a bag of money falls out of an armored car and lands practically at their feet.
Sally quickly picks it up and decides to take it home until they decide what to do with it.
There, she counts the money, and it’s fifty thousand dollars.
The husband says, “We’ve got to give it back.”
She says, “Finders keepers,” and puts the money back in the bag and hides it up in their attic.
The next day, two FBI men are going door-to-door in the neighborhood looking for the money and show up at their home.
They say, “Pardon me, but did either of you find or know about some money that fell out of an armored car yesterday?”
She says, “No.”
The husband quickly interjects, “She’s lying!! She hid it up in the attic.”
She says, “Don’t believe him, he’s getting senile.”
However, the agents sit the man down and begin to question him.
“Sir, please tell us the story from the beginning.”
The old man says,
“Well, when Sally and I were walking home from school yesterday…”
The FBI agents immediately look at each other and say, “Let’s get out of here!!”
Newer Post Older Post