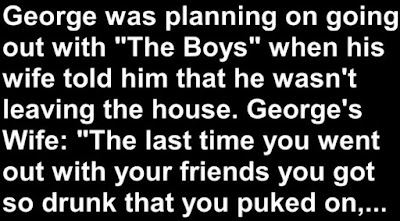 George was planning on going out with “The Boys”
when his wife told him that he wasn’t leaving the
house. George’s Wife: “The last time you went out
with your friends you got so drunk that you puked on
your shirt.” George: “But Honey, I promise that I wont
drink a drop of alcohol all night!” So after begging his
old lady for an hour,.. George got the OK the go out
with the guys as long as he stayed off of the booze.
George met up with the guys at a local bar and
proceeded to get shit-faced. After about 3 hours of
guzzling liquor, George blew chow all over his shirt.
George: “Shit! The old lady is going to throw my ass
out of the house for getting drunk and puking on my
new shirt!” Bill, George’s best pal, gave drunk ass
George an idea of how to keep from getting in trouble
with the wife. Bill: “All you got to do is have a $20 bill
in your hand when you walk through the door. Then,
when she accuses you of barfing all over yourself,Just
tell her that some other drunk puked on you and that
he gave you 20 bucks to get the shirt cleaned.” So,
when drunk ass George walked into the house with
money in hand, his wife was waiting for him in the
living room. Georges wife: “I knew that your drunk
ass would spew bile and booze all over that new
shirt!” George: “Honey, let me explain! This drunken
fool at the bar puked on me and gave me 20 bucks to
have it cleaned.” His wife snatched the money out of
his hand and observed that he was holding two $20
bills. George’s wife: “Is that so? Then where did the
other 20 dollar bill come from?”
*
*
*
*
*
*
*
*
* * *
George: “Oh, That’s from the guy who shit in my pants.”
Newer Post Older Post