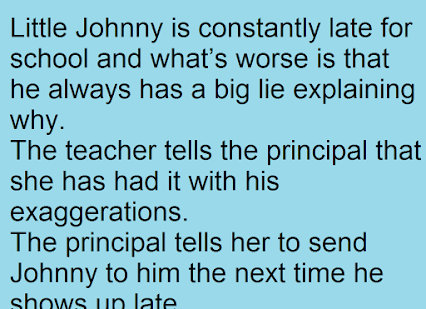 Little Johnny is constantly late for school and what’s worse is that he always has a big lie explaining why.

The teacher tells the principal that she has had it with his exaggerations.

The principal tells her to send Johnny to him the next time he shows up late.

He will tell Johnny a lie so big that he will never tell another one. Ever.

The next day, Johnny shows up two hours late.

Johnny says, “I was two hours early today so I had time to fish in the pond on my way to school.

I caught a 17-pound trout and had to take it home.

If I didn’t clean it and freeze it, my mom would’ve been angry. That’s why I’m so late”.

The principal tells Johnny about his own trip to school that day.

He says, “I was walking to school through the park on the trail today when I heard something behind me.

I turned around and was shocked to see a giant grizzly bear behind me.

He was 24 feet tall and had 6-inch fangs. He was going to eat me, Johnny! Just then a little dog ran out from the bushes, jumped up and attacked the bear.

The little dog killed the bear and then ate the whole bear right there in front of me. What do you think of that, Johnny?”