Jane was a first time contestant on the $65,000 quiz show 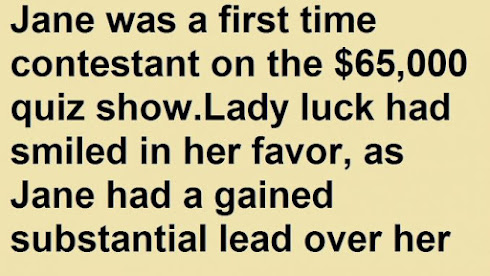 Jane was a first time contestant on the $65,000 quiz show.Lady luck had smiled in her favor, as Jane had a gained substantial lead over her

opponents.She even managed to win the game but, unfortunately, time had run out before the show’s host could ask her the big question. Jane agreed to return the following day.

Jane was nervous as her husband drove them home. “I’ve just gotta win tomorrow. I wish I knew what the answers are! You know I’m not going to sleep at all tonight. I will probably look like garbage tomorrow.”Relax honey,” her husband, Roger, reassured her, “It will all be OK.”

Ten minutes after they arrived home, Roger grabbed the car keys and started heading out the door.”Where are you going?” Jane asked. “I have a little errand to run. I should be back soon.”

After an agonizing 3 hour absence, Roger returned, sporting a very wide and wicked grin.”Honey, I managed to get tomorrow’s question and answer!””What is it?” she cried excitedly. “OK.

The question is ‘What are the three main parts of the male anatomy?’ And the answer is ‘The head, the heart, and the penis.’

“The couple went to sleep with Jane, now feeling at ease, plummeting into a deep slumber. At 3:30 a.m., however, Jane was shaken awake by Roger, who was asking her the quiz show question.

“The head, the heart, and the penis,” Jane replied groggily before returning to sleep.And Roger asked her again in the morning, this time as Jane was brushing her teeth. Once again, Jane replied correctly.

So it was that Jane was once again on the set of the quiz show.Even though she knew the question and answer, she could feel butterflies.

The cameras began running and the host, after reminding the audience of the previous days’ events, faced Jane and asked the big question.

“”I, uhh, ooooooohh, darn it! My husband drilled it into me last night and I had it on the tip of my tongue this morning…” “That’s close enough!” said the game show host, “CONGRATULATIONS!!”