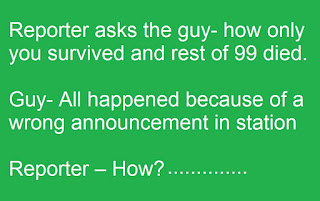 Reporter asks the guy- how only you survived and rest of 99 died.

Guy- All happened because of a wrong announcement in station

Guy- They announced that ,” Train is arriving on platform, so everyone shocked and jumped on tracks but instead of platfrom train arrived on tracks!!!

Reporter- Wow those guys are really stupid , Seems only you are the smart one.

Guy- What?, NO! i was on the track and jumped on to platform because i wanted to commit suicide!!!!