Home » »Unlabelled » This is probably the funniest date story ever, first date or not!!! We have all had bad dates but this takes the cake.

This is probably the funniest date story ever, first date or not!!! We have all had bad dates but this takes the cake. 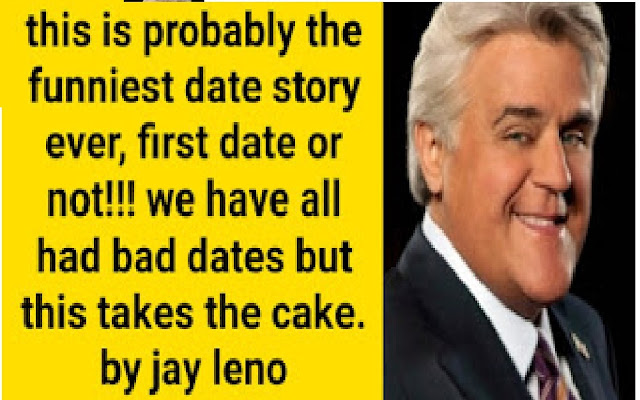 Jay Leno went into the audience to find the most embarrassing first date that a woman ever had. The winner described her worst first date experience. There was absolutely no question as to why her tale took the prize!

She said it was midwinter...snowing and quite cold... and the guy had taken her skiing in the mountains outside Salt Lake City, Utah. It was a day trip (no overnight).
They were strangers, after all, and had never met before. The outing was fun but relatively uneventful until they were headed home late that afternoon. They were driving back down the mountain when she gradually began to realize that she should not have had
that extra latte !! They were about an hour away from anywhere with a restroom and in the middle of nowhere! Her companion suggested she try to hold it, which she did for a while.

Unfortunately, because of the heavy snow and slow going, there came a point where she told him that he had better stop and let her go beside the road, or it would
be the front seat of his car. They stopped and she quickly crawled out beside the car, yanked her pants down and started. In the deep snow she didn't have good footing, so she let her butt rest against the rear fender to steady herself. Her
companion stood on the side of the car watching for traffic and indeed was a real gentleman and
refrained from peeking. All she could think about was the relief she felt despite the rather embarrassing nature of the situation.

Upon finishing, however, she soon became aware of another sensation. As she bent to pull up her pants, the young lady discovered her buttocks were firmly glued against
the car's fender. Thoughts of tongues frozen to poles immediately came to mind as she attempted to disengage her flesh from the icy metal. It was quickly apparent that she had a brand new problem, due to the extreme cold.

Horrified by her plight and yet aware of the humor of the moment, she answered her date's concerns about' what is taking so long' with a reply that indeed, she was
'freezing her butt off' and in need of some assistance! He came around the car as she tried to cover herself with her sweater and then, as she looked imploringly into his eyes, he burst out laughing. She too got the giggles and when they finally managed to
compose themselves, they assessed her dilemma. Obviously, as hysterical as the situation was, they also were faced with a real problem.

Both agreed it would take something hot to free her chilly cheeks from the grip of the icy metal! Thinking about what had gotten her into the predicament in the first
place, both quickly realized that there was only one way to get her free. So, as she looked the other way, her first-time date proceeded to unzip his pants and pee her butt off the fender.

As the audience screamed in laughter, she took the Tonight Show prize hands down. Or perhaps that should be 'pants down'. And you thought your first date was embarrassing.
Jay Leno's comment..... 'This gives a whole new meaning to being pissed off.'

Oh, and how did the first date turn out? He became her husband and was sitting next to her on the Leno show.

If you laughed at this pass it on. Remember, if you haven't got a smile on your face and laughter in your heart, then you are just a sour old fart or tart.
Newer Post Older Post